Cons: Middling beer (note: this may change as we see what the garden has in store)

Number one reason you should go: 56 Brewing may have a fancy new space, but their community-loving heart and soul remains unchanged. Go to support a brewery that will support you back.

Seeing as our last stop was 56 Brewing‘s old location (now Broken Clock Brewing Cooperative), I thought it only appropriate to revisit the subject of my first review and check out 56’s new digs, a mere half mile southwest of their former space.

With its new taproom, 56 Brewing proves it deserves a spot among the Twin Cities’ trendiest breweries. An unassuming building wedged in a business park outpost just this side of Northeast Minneapolis, it boasts a new non-garage structure with a pleasing steel-and-wood aesthetic, yard games, and a garden in the back where the brewers grow their own hops.

56 Brewing’s slogan is “Garden to Growler,” and according to their website, the garden is also used to grow “local indigenous spices, herbs, flowers and plants” that 56 uses to pilot beer creations. 56 Brewing’s hyper-local focus continues with the fact that it is a Community Supported Brewery, or CSB. That means members can pay in a certain amount every year to get, among other perks, free beer, swag, and pre-releases of new specialty beers.

Inside, we admired the high ceiling-ed space lit up by car dealership-style window walls decorated on the right by an old map of Minneapolis and on the left by a massive image of Minnesota built out of what I can only assume is reclaimed wood. Two TVs blessed the space with Chopped re-runs as we played a leisurely game of bags in the afternoon sun. As we chatted idly with other patio dwellers, it became obvious that that, though it now exists in a fancier space, 56 Brewing’s ultra-low-key vibe remains unchanged.

None of 56 Brewing’s beers blew me away (I was disappointed at the lack of promised “copious amounts” of honey in the NE Nectar), but they get major points for their steam punk flight holders (below – yes, they spin). In a recent Untappd review, I wrote “An IPA is like a hot shower: good when it stings a little bit.” Given that criteria, it’s unsurprising my favorite 56 brew was their Nose Hair Bender IPA. You can read my review of that beer, as well as the others I tried, on Untappd at the links below: 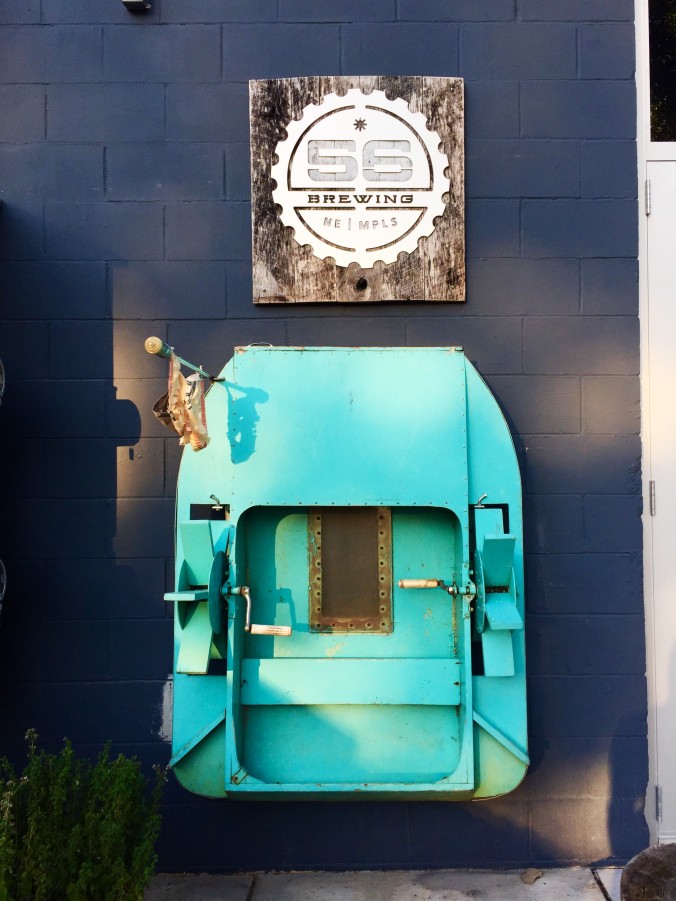